Match the corresponding numbers on the foot diagram below for a list of conditions that may be causing your foot and ankle pain. This is meant for educational purposes only.

If you're having a problem with your foot or ankle, visit a podiatrist - a foot and ankle specialist! 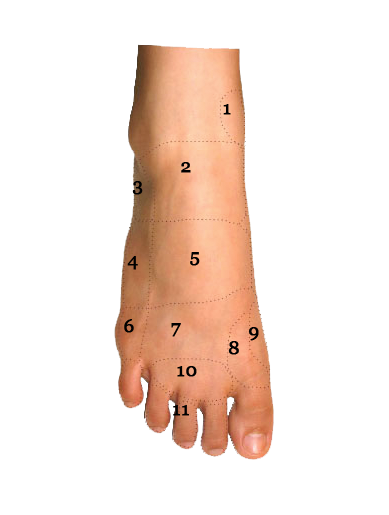 Ankle Arthritis - Pain, stiffness and limited movement caused by inflammation in the ankle joint. The most common types of arthritis that affect the foot are osteoarthritis and rheumatoid arthritis.

Tibialis Anterior Tendonitis - Inflammation of the tibial tendon due to overuse, injury, or abnormal mechanical functioning of the foot and ankle.

Ankle Fracture - A break or crack in one or more of the bones that makes up the ankle joint, also known as a broken ankle.

High Ankle Sprain -  Injury to the ligaments that connect the two leg bones: the tibia and the fibula, at the top of the ankle joint. With different grades of sprains depending on severity.

Ankle Sprain - An injury to one or more ligaments of the ankle. Symptoms may include pain, swelling, and discoloration associated with bruising.

Peroneal Tendonitis - Injury to the peroneal tendons located on the outside of the ankle and midfoot. These tendons can become inflamed with overuse activities and from trauma such as ankle sprains.

Sinus Tarsi Syndrome - (STS) is a condition affecting the foot and ankle where persistent pain or tenderness occurs on the outside of the ankle, near the hindfoot and may be caused by chronic ankle sprains and overpronation.

Tarsal Coalition - An abnormal connection of two or more bones in the back of the foot. Abnormality most frequently occurs during fetal development but may not be symptomatic until bone maturity.

Ankle Instability - This may be caused by chronic ankle sprains that damaged and weakened to the ligaments and tendons that help stabilize the ankle.

Metatarsal Fracture - A break or 'crack' in one of the metatarsal bones (long bones) in the foot. Metatarsal fractures can be caused by sudden injury (acute fracture) or from overuse and repeated trauma (stress fracture).

Foot Sprain - A foot sprain is an injury to the ligaments and soft tissues of the foot. This may be caused by sudden trauma, such as rolling the foot, which causes the ligaments to pull away from the bone.

Ganglion Cyst - A common benign soft tissue, a fluid-filled mass that grows under the skin and forms on top of a join, ligament or tendon.

Midfoot Arthritis - Pain, swelling, and inflammation in and around the midfoot that causes pain when standing and walking.

Lisfranc Injury - A serious injury to the Lisfranc joint (where the metatarsal bones meet the tarsal bones) caused by trauma such as an automobile accident or crush injury.

Navicular Stress Fracture - A break in the navicular bone.

Bunionette (Tailor's Bunion) - A painful bump or protrusion on the outside of the foot where the little toe meets the foot.

Metatarsalgia - When the ball of the foot becomes painful and inflamed.

5th Metatarsal Fracture or Stress Fracture - A break in the metatarsal bone caused by increased stress on the foot from overuse either from strenuous exercise and/or weight gain.

Midfoot Arthritis - Midfoot arthritis symptoms include inflammation (swelling) and pain in the midfoot when standing and walking.

Lisfranc Injury - A serious injury to the Lisfranc joint (where the metatarsal bones meet the tarsal bones) caused by trauma such as an automobile accident or crush injury.

Hallux Rigidus - A disorder of the big toe joint that causes stiffness and pain in the joint. Pain and symptoms increase with prolonged walking and standing.

Bunions - A bony, painful bump that forms at the base of the big toe causing pain and swelling.

Sesamoiditis - Inflammation of the sesamoid bones and the tendons around the bone. Sesamoiditis is often caused by overuse activities, high-impact sports, and even wearing high-heel shoes because of increased pressure on the ball of the foot. Symptoms include swelling and pain located under the big toe joint.

Gout - The accumulation of uric acid in the joints or tissues of the body. Gout can be very painful and most commonly affects the big toe joint. Symptoms of gout may include swelling, redness, and severe pain that makes walking difficult.

Turf Toe - Sprain of the great toe joint due to overuse or trauma.

Metatarsalgia - When the ball of the foot becomes painful and inflamed.

Morton’s Neuroma - A painful condition that most commonly affects the ball of the foot and is caused by a thickening of the nerve tissue. Commonly described as; feeling like your walking on a marble and feeling like a sock is wadded up under the foot.

Metatarsal Fracture - A break or 'crack' in one of the metatarsal bones (long bones) in the foot. Metatarsal fractures can be caused by sudden injury (acute fracture) or from overuse and repeated trauma (stress fracture).

Hammertoes - (Claw toes) - Typically a disorder of the lesser toes. Caused by the joints becoming arthritic and tightening of the tendons and ligaments in the foot which causes them to bend or buckle, resulting in pain and difficulty fitting in shoes.

Toenail Fungus - A common fungal infection of the toenails caused by dermatophytes also known as onychomycosis.

Toe Fracture  - A toe fracture is a break in one or more of the phalanges (toe) bones in the foot. Typically caused by trauma or injury to the foot or toe.

Find caring and professional treatment for your foot and ankle pain near Long Beach, CA by calling 562-433-0478.